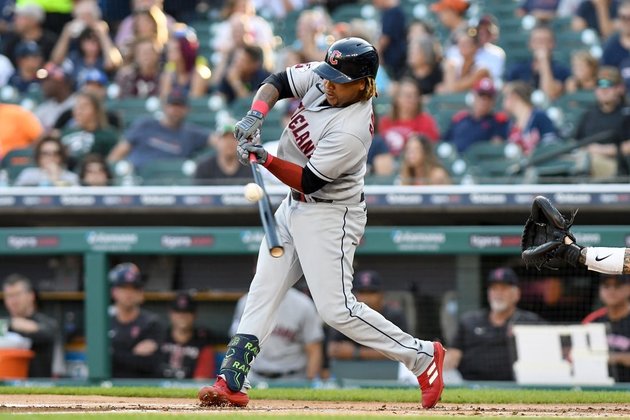 Steven Kwan and Andres Gimenez each had two hits and scored a run as the Cleveland Guardians won their fourth straight by edging the host Detroit Tigers 3-2 on Wednesday.

Will Benson notched his first major league RBI, while Cleveland pitchers recorded 14 strikeouts. Bryan Shaw (5-2) pitched an inning of scoreless relief and was credited with the win. Emmanuel Clase collected his 26th save.

Cleveland starter Aaron Civale, who was making his first start since July 13, gave up two runs and three hits in four innings. He was on the 15-day injured list with a ligament strain and right wrist inflammation.

Riley Greene had two hits and scored a run for Detroit. Kerry Carpenter went 0-for-4 and struck out three times in his major league debut.

The Guardians scored a first-inning run when Kwan tripled to right field and scored on Jose Ramirez's one-out single.

Cleveland added to its lead in the second. Gimenez led off with a bunt single, stole second, moved to third on a flyout and scored on Benson's single. Austin Hedges' single put runners on the corners and Myles Straw's fielder's choice grounder brought in Benson for a 3-0 advantage.

Detroit cut the Guardians' lead to one in the fourth. Greene led off with a double, the first batter to reach base against Civale. Javier Baez was hit by a pitch with one out and Harold Castro followed with an RBI single. Eric Haase ripped a double to bring home Baez before Civale set down the next two batters.

The Tigers loaded the bases with one out in the eighth against James Karinchak on singles by Greene and Castro, sandwiching a hit by pitch. Karinchak then struck out Haase and Carpenter to end the inning.

BEIJING, China: During a ceremony this week, China certified its C919 narrow-body passenger jet, which is part of the country's ...

NEW YORK, New York - It was another volatile day on Wall Street on Friday as investors weighed up more ...

Asian stocks close out month and quarter on dismal note

SYDNEY, NSW, Australia - Asian stocks closed out the month and the quarter on a dismal note Friday."The 'troubling triad' ...

With eye on competition, Tata Motors selling $10,000 EV in India

NEW DELHI, India: As it seeks to attract more buyers, Tata Motors, the country's only electric vehicle maker, has introduced ...

40,000 Chinese workers to be deported as Manila ends online gaming

MANILA, Philippines: The justice ministry in Manila said it will close 175 Chinese-owned "Philippine offshore gambling operators" and deport some ...

Abortion regardless of marital status legalized by India's top court

NEW DELHI, India: In a decision widely hailed by women's rights activists, India's top court upheld the right of a ...

Another delay for US moon rocket as hurricane approaches Florida

CAPE CANAVERAL, Florida: NASA has announced that it will roll its giant moon rocket, the Space Launch System, off its ...

MIAMI, Florida: As Hurricane Ian crashes across the Caribbean, bringing high winds and torrential rains, Florida residents are scrambling to ...

KRAKOW, Poland: Organizers said an April Roger Waters concert planned in Krakow, Poland, has been canceled due to Waters' support ...

TEL AVIV, Israel - The Israeli army has approved using drones to carry out assassinations in the West Bank.The extraordinary ...

LONDON, England: As Britain adjusts to its first new head of state in 70 years, the government printers responsible for ...