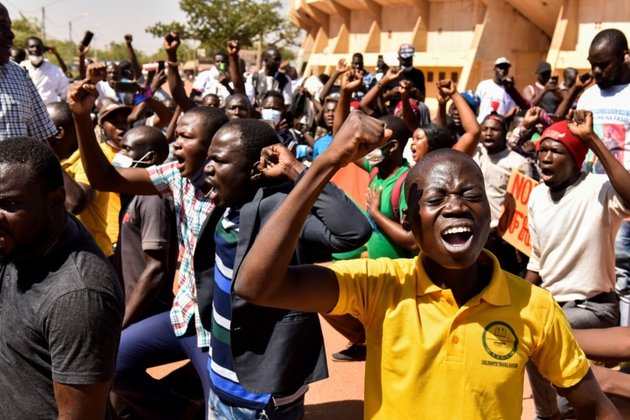 OUAGADOUGOU, BURKINA FASO - Three Burkina Faso soldiers died and 11 militants were killed during an attack on the troops Wednesday, the army said, amid worsening insecurity that has sparked anti-government protests.

The attack took place against an army detachment in Thiou in the Yatenga Region, the army said in a statement Thursday.

'Eleven terrorists were neutralized. However, three soldiers fell during combat and dozens were wounded,' it said.

The attack by suspected Islamist militants was the latest of three since November 14 that have killed more than 60 security forces and more than a dozen civilians, sparking nationwide anger and protests, with calls for President Roch Marc Kabore to resign.

Opponents urged people to stage fresh protests Saturday against the government's inability to contain a four-year insurgency by militants linked to al-Qaida and Islamic State that has killed thousands and displaced upward of a million people.

Ouagadougou's mayor issued a statement Wednesday saying no protests had been authorized and asking police to take necessary measures to stop illegal demonstrations.

The education ministry said schools would be shut nationwide on Friday and Saturday for the safety of students and teachers, given the calls for protests.

The U.N. special representative for West Africa and the Sahel said Thursday that the situation in Burkina Faso was concerning, particularly in a region that has seen three military takeovers since the start of the year.

'I appeal to the wisdom of civil society and other actors to prevent a country like Burkina ... from falling into a crisis like what is happening elsewhere,' Mahamat Saleh Annadif told a news conference.

Some of the anger in Burkina Faso last week was directed against former colonial power France, which has deployed thousands of soldiers in the West Africa Sahel region to combat the militants.

Hundreds of people in the city of Kaya massed over the weekend to block a convoy of French logistics and armored vehicles on its way to neighboring Niger. The convoy has still not been able to leave Burkina Faso.

WASHINGTON D.C.: Chicken tenders may become a victim of failing supply chains, resulting in shortages in U.S. restaurants and grocery ...

In rule change, US debt collectors can now SMS debtors

Europe says $340 billion program will not burden countries with debt

BRUSSELS, Belgium: The European Union has announced the creation of a program worth $340 billion, called "Global Gateway," to act ...

Stock markets in Asia forge ahead on back of global rally

SYDNEY, NSW, Australia - Stocks in Asia continued the merry-go-round on Wednesday as investors the world over swarmed stock markets ...

TORRANCE, California: Honda is recalling some 725,000 SUVs and pick-up trucks due to faulty hoods that could open while vehicles ...

ENIWA, Japan On the northern island of Hokkaido, Japan opened up its humbly named Self Defense Force's firing exercises to ...

Large UK Christmas parties being canceled due to Omicron

LONDON, England: Due to the uncertainty caused by the Omicron variant of COVID-19,, major companies, including NatWest, Aviva, Deloitte and ...

Over 1,300 evacuated after volcano rains fire on Indonesian villages

JAKARTA, Indonesia: Rescue personnel in Indonesia are facing the arduous task of looking for survivors in villages blanketed by searing ...

On Wednesday and Thursday of this week, U.S. President Joe Biden will host a virtual "Summit for Democracy." The gathering ...

NEW ORLEANS, Louisiana: At least ten passengers and crew members onboard a Norwegian Cruise Line ship that docked in New ...