Maryland aims to even out performance vs. Richmond in Bahamas 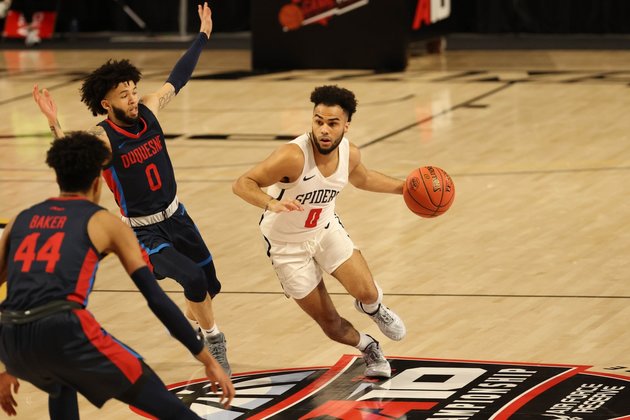 Two teams that are 120 miles apart are flying 1,200 miles to face each other Thursday on a basketball court for just the second time in four decades.

Maryland and Richmond, both coming off home wins in which they fended off challenges from Hofstra, meet on Thanksgiving night in the opening round of the Bahamas Championship in Nassau.

Maryland (4-1) survived the closer call against Hofstra, needing two free throws by Ian Martinez with 4.2 seconds left to win 69-67 on Friday. Three nights later, Richmond (3-2) rallied from 14 points down in the first half to race past Hofstra 81-68.

"Midway through the first half, we were able to impose our will," Richmond coach Chris Mooney said. "Being able to do that is going to be important later in the season."

Maryland is still in recovery after losing to Richmond's Atlantic 10 rival, George Mason, last week. The defeat, the first ever in 10 games against the Patriots, knocked the Terps out of the Top 25.

Maryland is trying to find some touch, hitting just 25.4 percent of its shots from beyond the arc to rank No. 338 among the 358 teams in Division I. Richmond has had no such struggles, making 40.9 percent of its 3-pointers to rank No. 26.

Maryland will try to counter Gilyard with Fatts Russell (12.8 points per game). Eric Ayala (15.4 points) is the Terps' top scorer despite making only 12 of 42 from beyond the arc (28.6 percent).

"Maybe us getting out of here, going down to warm weather and just bonding, maybe we'll come back one of the hottest teams shooting the ball in America," Maryland coach Mark Turgeon said.

The winner will face Louisville (3-1) or Mississippi State (4-0) on Saturday night.

LONDON, England: British Airways has suspended flights to Hong Kong, after its crew members were reported to have been forced ...

NEW YORK, New York - U.S, stocks had a volatile day on Friday before all the major indices finished in ...

DUBLIN, Ireland: Industry officials have said that they do not expect large jumps in retail spending to be seen before ...

YOKOHAMA, Japan: The Covid Omicron variant of COVID-19 could add pressure to a chronic shortage of microchips used in car ...

SYDNEY, NSW, Australia - Stocks in Asia were mostly higher on Friday as investors and traders took emerging news about ...

HOUSTON, Texas: On Monday, a Texas man, Lee Price III, was sentenced to over nine years in prison after fraudulently ...

WASHINGTON D.C.: Earlier this month, the federal Education Department announced it is canceling another round of student loan payments, adding ...

LONDON, England: The Taliban has executed dozens of members of the former government's security forces after the surrender of Afghanistan, ...

NATO chief: Countries should prepare for Russian incursion in Ukraine

RIGA, Latvia: Jens Stoltenberg, secretary-general of the North Atlantic Treaty Organization, has warned that the American-led military alliance should be ...

JOHOR BAHRU, Malaysia As buses of vaccinated Malaysians working in Singapore were ferried across the Causeway Bridge that connects the ...