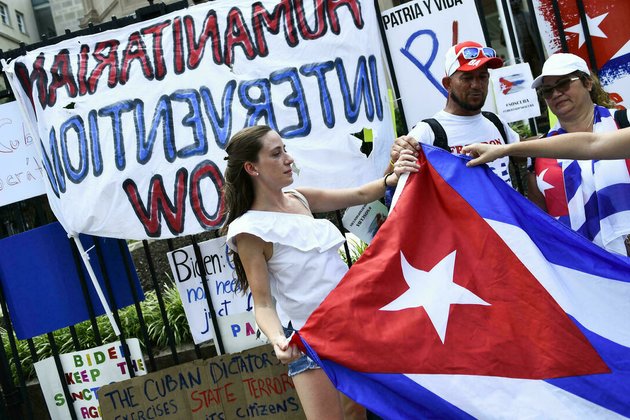 Cuba denounced the targeting of its Paris embassy on Monday as a "terrorist attack" encouraged by the United States after the building was bombarded with Molotov cocktails.

Firefighters in the French capital said two incendiary devices were thrown at the delegation, located in the city's 15th arrondissement, causing minor damage.

In a press release, the Cuban embassy said that "terrorist acts" are "encouraged" by US government sponsored campaigns that "incite violent acts." An embassy tweet showed some of the damaged caused by the explosives.

Although nobody has claimed responsability for the attacks, French politician Jean-Luc Melenchon, leader of the extreme left wing La France Insoumise ("Unbowed France") party tweeted that the "incredible and hateful" action were "a direct effect" of the "absurd campaigns of hate and the deadly boycott by the US" against Cuba.

Fire officials said they were alerted to the attack after midnight and "the devices, which caused minor damage, were extinguished before (firefighters) arrived."

Police did not immediately provide any more information.

Three Molotov cocktails -- two of which reached the embassy's facade and another that made it into the building -- struck the building at 11:45 and started a fire that was quickly put out by the mission's employees, according to the Cuban Foreign Ministry.

Demonstrators marching in favor of and against the Cuban government took to the streets in cities all over the world this weekend and on Monday, coinciding with July 26 national day commemorations and just two weeks after anti-government protests erupted throughout the island nation.

Around two dozen countries, including Brazil, Colombia, and Ecuador, on Monday joined US Secretary of State Antony Blinken in calling on the Cuban government "to respect the legally guaranteed rights and freedoms of the Cuban people" and to "release those detained for exercising their rights to peaceful protests."

The "statements of the US secretary of state are based on the support of a handful of countries that have been pressured to accept his decrees," Cuban Foreign Minister Rodriguez said in a separate tweet.

"#Cuba counts the support of 184 nations that all call to #EndTheEmbargo," Rodriguez said, referring to the United States government's longstanding sanctions that have been in place since 1962.