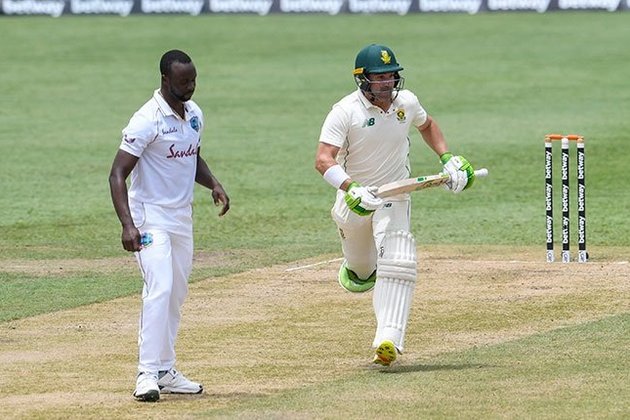 Dean Elgar's 17th Test 50 guided South Africa to 125/4 at tea on the first day of the second Test against the West Indies in St Lucia.

The skipper's 50 came off 147 balls and in an 87-run fourth-wicket partnership with Kyle Verreynne (27), they held the West Indies at bay.

However, Shannon Gabriel (2/36) ended the partnership moments before tea when he strangled Verreynne down the leg side.

After losing three wickets in the first session, they blunted the accurate West Indies attack. Runs were still hard to come by, with only 81 runs scored in the session and the late loss of the set Verreynne. South Africa had resumed from their lunch position of 44/3, which was very shaky.

It wasn't smooth sailing for the Proteas as Verreynne survived a close leg-before shout off Kyle Mayers when he was on 10.

It wasn't given out when the West Indies review, it showed that it was missing the stumps. Without being attacking, Verreynne was very much happy getting behind the line of the ball.

Where the West Indies disappointed was with Gabriel, whose radar in the second session deserted him after an excellent opening spell.

When he came back before tea, he delivered an eight-minute over, but one that tested Elgar with some nasty short deliveries.

One of them followed Elgar, but it clipped his bat and raced away for his sixth four while raising the important landmark.