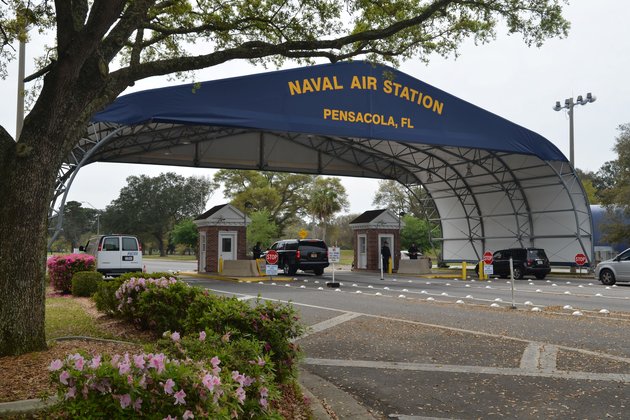 WASHINGTON, DC - U.S. investigators are trying to determine what caused a Saudi air force pilot in the United States for flight training to go on a deadly shooting rampage at a U.S. naval base in Florida.

The shooting, which took place at the Pensacola Naval Air Station in Florida early Friday, left four people dead, including the shooter. A law enforcement official said another eight people were wounded.

The U.S. Navy and law enforcement officials identified the shooter as a Saudi pilot, one of up to a few hundred foreign nationals who had come to the base in Pensacola, known as 'the Cradle of U.S. Navy aviation' for training.

Guns are not permitted at the Pensacola Naval Air Station, but Escambia County Sheriff David Morgan said the shooter managed to get a handgun onto the base before targeting individuals at one of the buildings. Officials said the rampage ended when a sheriff's deputy cornered and shot the suspect in a classroom.

Officials with the U.S. FBI confirmed they were leading the probe, telling VOA it was still in the early stages.

"It is too early to determine motive," a FBI official said on condition of anonymity, admitting terrorism had not been ruled out.

Florida Governor Ron DeSantis said the nature of the investigation would be different because of the involvement of the Saudi air force pilot.

"There is obviously going to be a lot of questions about this individual being a foreign national, being a part of the Saudi air force," he told reporters.

"The government of Saudi Arabia needs to make things better for these victims," he added. "They are going to owe a debt here, given that this was one of their individuals."

U.S. President Donald Trump tweeted Friday that he had been in contact with King Salman, who offered condolences.

"The king said that the Saudi people are greatly angered by the barbaric actions of the shooter," Trump said.

Later, Trump told reporters at the White House, "It's a horrible thing that took place and we're getting to the bottom of it."

The shooting at the Pensacola Naval Air Station was the second deadly shooting at a U.S. naval facility this week.

A U.S. sailor shot three civilians at a base in Pearl Harbor, Hawaii, on Wednesday, killing two of them before committing suicide.

"These acts are crimes against all of us," acting Navy Secretary Thomas Modly said in a statement Friday.

"Our prayers are with the families of the fallen and with the wounded," he added. "It is our solemn duty to find the causes of such tragic loss and ceaselessly work together to prevent them."

Steve Herman contributed to this report.