Brits excited to get down to 9-to-5 business 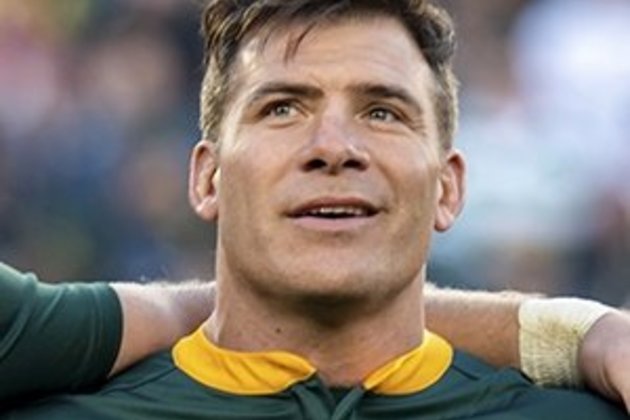 Brits retired from the game for a second - and final time - after the global showpiece in Japan, although he had one final run for the Barbarians against Wales in Cardiff last Saturday.

The 38-year-old, who arrived back in Cape Town on Thursday morning, told RugbyRocks.com he will soon be working for Remgro, an investment holding company, of which Johann Rupert is chairperson.

'On December 13 I start my first real job,' said Brits.

'Hopefully, it won't feel too much like a real job!

'At first, Remgro will give me exposure to different financial markets and different parts of the business model in general. I'm interested in things like private equity, corporate finance and fintech.

'It will be an overview of what Remgro does and their structures, so I can understand their business model better. And from there, they will integrate me into the real world!'

Until April last year, Remgro had a 50% stake in Saracens, whom Brits represented from 2009 to 2018. In 2012, the 15-Test Brits received an offer from another club that would've doubled his salary.

'Saracens weren't able to come close to matching that offer,' he recalled.

'So I said, fine, let's look at the long-term plan for me at Saracens, not just as a player but as a person. Professional rugby players tend to struggle with the transition into the working world.

'After chatting with Johann and (Remgro CEO) Jannie Durand, I decided to stay at Saracens, as I would have the opportunity to work for Remgro after I retired from rugby. At that stage, I didn't expect to play until the age of 38, but now that I have hung up my boots, I will be joining them.'

Brits says it will be 'insane' for him to go from playing rugby to having a nine-to-five office job.

'It's like asking someone who's never done anything else to go and do something they've never done before,' he added.

'Saracens gave me some free time to get some work experience at KPMG and a company called Enstarbut that was only for one day a week and the next day I was back between the four lines.'

Brits is also considering whether to study towards an executive MBA through Cambridge University.

'I have already been accepted, but it will cost Pound 70 000 (R1.3-million) for me to do it from South Africa over a 22-month period, so I need to decide if it's financially viable. I would have to fly to the UK once a month, too.'

SYDNEY, Australia - Stocks in Asia tumbled on Tuesday with fears about a divided America, ahead of the president's impeachment ...

AUSTIN, TEXAS - With China poised to increase purchases of U.S. agricultural goods this year as part of a Phase ...

DUBLIN, Ireland - Apple has been recognised as one of the greatest foreign direct investors in Ireland.The company on Monday ...

WHO: Coronavirus could spread to other countries "in coming days"

GENEVA, Switzerland - The World Health Organization (WHO) says the novel coronavirus could spread to other countries "in the coming ...

NEW YORK, New York - Fox News has doubled down on the impeachment of President Donald Trump, with its top ...

Caribbean and Latin America deadliest region in world for journalists

It has been a deadly decade for journalists across the world, however last year there was a glimmer of hope ...

BAGHDAD, Iraq - Two rockets have landed near the U.S. embassy in Baghdad located in the heavily fortified Green Zone, ...

Taking a look at the politicisation of antisemitism

LONDON, UK In 2004 Greg Philo and Mike Berry authored Bad News from Israel, a ground-breaking work for the Glasgow ...