Trump Banks on Economy for 2020 Victory 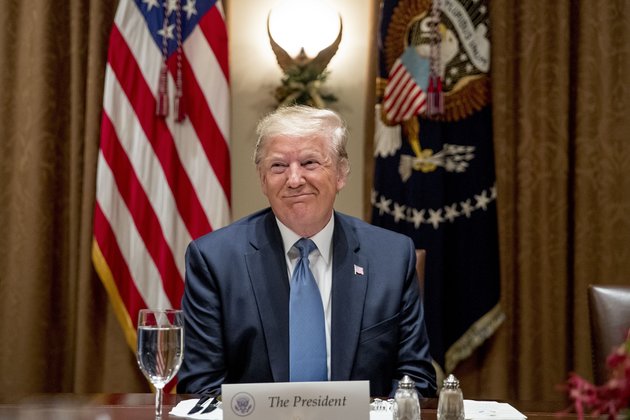 WHITE HOUSE - "It's the economy, stupid" has been a catchphrase of U.S. presidential politics since the 1992 campaign, when Bill Clinton unseated incumbent George H.W. Bush.

Trump - in tweets, at political rallies and in remarks to reporters - constantly emphasizes the performance of the U.S. economy, stock market surges, low unemployment rates and his tax cuts to boast he is doing a great job as president.

Economists and political analysts are divided on whether that message will enable the incumbent to stay in office beyond January 2021.

Ever since Clinton, "we've all kind of assumed that should be true. And I think for the most part, it is," said Ryan McMaken, senior editor and economist at the Mises Institute, a politics and economics research group in Alabama. He cautioned, though, that Trump finds himself on one side of a culture war that his predecessors did not have to confront, as well as a deep partisan divide on consumer confidence.

Policy analyst James Pethokoukis at the Washington-based American Enterprise Institute, a public policy research group, also is cautious about the economy prevailing over all other issues.

"Just having a strong economy is not going to guarantee you re-election," he said. "People often point back to the 2000 election, which occurred after a decade of tremendous economic growth any way you want to measure it - gross domestic product, jobs and wage growth. And yet, [Clinton's vice president] Al Gore still lost that election to George W. Bush."

McMaken questioned whether voters in key swing states - such as Wisconsin, Michigan, Pennsylvania and Ohio - who cast ballots for Trump in 2016 were experiencing enough of the touted economic performance to vote again for the president.

Overall, however, "it's not a bad economy to run on if you're Donald Trump," said Pethokoukis.

Trump, said to have concerns about the direction of the economy ahead of next November's election, will likely push for more tax cuts, passage of a renegotiated North American trade pact and continued pressure on the country's central banking system, the Federal Reserve, to lower interest rates.

There are rumblings of economic storm clouds on the horizon. The impact can be seen in Trump's trade war with China, which has hurt U.S. farmers and raised prices for consumer goods. It's also reflected in the Institute for Supply Management's Manufacturing Index, an underperforming U.S. Private Sector Job Quality Index and a ballooning record national debt, in addition to the worrying level of money owed to creditors by middle-class Americans.

"We've actually been in a sort of a manufacturing recession, seen a shrinkage of factory jobs, the exact kinds of jobs that I'm sure that people voting for the president thought would be a lot better now," said Pethokoukis.

So far, none of this has prompted a major stock market correction.

"There seems to be a lot of adaptations in the markets to Trump's America. That may work to his advantage," said the Mises Institute's McMaken.

Analysts note a lack of emphasis on economic platforms so far by the leading Democratic U.S. presidential candidates seeking to oust Trump next year.

But such a platform is likely to be touted when the opposition party holds its convention next July in Milwaukee and picks its campaign ticket. Pethokoukis suggested the Democratic Party should devise a plan with a goal to boost American worker productivity, which has flatlined for years.

McMaken pointed out that the widening chasm between the well-off and those struggling economically in the United States makes Trump vulnerable - something emphasized by left-leaning Democratic presidential contenders such as Bernie Sanders and Elizabeth Warren.

"On the ground level, I would say just in general, the economy isn't doing as well," concluded McMaken.

Amid an impeachment drive by the Democrats, Trump is repeatedly hammering on a specific message to those questioning his suitability for office while being impressed with the performance of their pension accounts during his presidency.

"Love me or hate me, you've got to vote for me," Trump said at a rally in New Hampshire in August, warning that Americans' investments portfolios would go "down the tubes" if he lost next year's election.