Under Trump, Louisiana Is at Epicenter of Migrant Detention 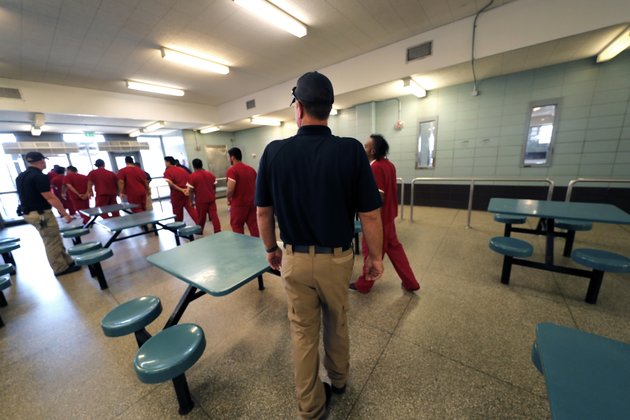 WINNFIELD, LA. - Tucked away in the dense forest of rural Louisiana is a barbed wire-ringed prison that has quickly become a major detention center for immigrants detained at the border.

The Winn Correctional Center is one of eight Louisiana jails that have started holding asylum seekers and other migrants over the past year, making Louisiana an unlikely epicenter for immigrant detention under President Donald Trump. U.S. Immigration and Customs Enforcement says it's now detaining about 8,000 migrants in Louisiana out of 51,000 nationally.

These new facilities, a mix of old state prisons and local jails, are a drive of several hours from New Orleans and other major cities, far from where most immigrant rights' groups and immigration lawyers are based. Migrants complain of mistreatment and prolonged detention.

"I knew they would detain us, but I never thought it would be for this long," said Howard Antonio Benavides Jr., an 18-year-old from Venezuela who has been at Winn for three months.

The surge has been welcomed by rural communities that have long relied on jails for jobs, and by the private prison company that gets paid by the federal government to detain the immigrants.

The shift has occurred against the backdrop of a criminal justice overhaul in Louisiana that has reduced the prison population, causing an economic threat for small towns with detention facilities.

ICE has stepped into that void. At Winn, which started detaining migrants in May, employee salaries have risen from $10 an hour to $18.50. Local officials have signed a new five-year contract that guarantees millions in payments to the local government and the state.

ICE refused several requests to comment on why it focused on Louisiana. In a statement, the agency said it identifies "contracts that can be modified to accommodate increased agency needs."

ICE and the private prison company operating the facility, LaSalle Corrections, allowed The Associated Press to visit Winn for three hours in September and take photos and video under the condition that migrants' faces not be shown.

The tour was tightly controlled. The AP was not allowed to speak to any detained migrants besides Benavides, who agreed to an interview through his lawyer. As a large group of migrants held in one tier started shouting "come here," in Spanish, jail officials prevented observers from approaching the immigrants and directed them outside. The men continued to shout from the windows.

Nearly 1,500 migrants are detained at Winn, where they sleep on twin beds in long, narrow units with barred gates. Formerly a medium-security prison, Winn has a dining hall, outdoor soccer fields, a gymnasium, and a 200-person chapel built by former inmates.

Most of the detainees appeared to be Spanish speakers. Others spoke Hindi and wore orange coverings wrapped around their heads.

Detainees are required to walk from site to site with their hands clasped behind their backs, as if they are handcuffed. Most employees don't speak Spanish or Hindi and communicate with migrants using hand signals or a few words of English that one person can translate to others.

Authorities at Winn said immigrants are better behaved and easier to oversee than inmates at a regular prison.

"There's been very little trouble," said Keith Deville, the facility's warden. "When you have convicted felons, they act a lot different."

Immigration detention has become increasingly controversial during the Trump administration, which separated thousands of families as part of a "zero-tolerance" policy at the U.S.-Mexico border.

The 51,000 immigrants that ICE is detaining across the country is just below an agency record set earlier this year and is several thousand more than authorized by Congress. The number of migrants has remained above 50,000 even as border crossings have fallen in recent months and the Trump administration has been aggressive about returning border crossers to Mexico and denying asylum claims.

Advocates blame the government for detaining legitimate asylum seekers and say the jails in Louisiana epitomize the problem.

A federal judge recently ruled that ICE was unlawfully refusing to release asylum seekers in Louisiana, and lawyers say very few people are released from Winn or other facilities in the state.

ICE has expanded its presence in Louisiana as other states have told the agency to stay out.

California and Illinois banned private immigration jails altogether, and even in conservative Texas, the Republican-led government of Williamson County voted to end ICE detention at a 500-bed jail.

There's no such resistance in Winn Parish or other rural Louisiana communities.

Winnfield, the largest city in the parish and the birthplace of legendary Louisiana Gov. Huey Long, has a tiny downtown with as many empty storefronts as open shops. Timber trucks carrying chopped logs from the surrounding forests roll down the highway. Sheriff Cranford Jordan said that aside from lumber, the area's two biggest job engines are the schools and the prison.

But Louisiana's criminal justice reforms could have eventually led to the prison closing, Jordan said.

"It would be devastating," he said. "You'd see people moving, bankruptcy. It would be like an automobile plant closing."

LaSalle Corrections, which was already running the prison, agreed to a five-year contract to hold ICE detainees in May. It also made a $2,000 contribution to the sheriff's campaign in March.

A privately held company based in Ruston, Louisiana, LaSalle operates six of the eight converted jails opened since last year.

LaSalle's facilities are spread out across Louisiana, connected by rural roads winding through forests and farmland. To advocates like Homero Lopez, executive director of the New Orleans-based Immigration Services and Legal Advocacy, the isolation is a serious problem for immigrants.

"Just the fact that you're detaining people in such rural, isolated places makes it not only difficult for the person themselves to fight their case, but it even makes it nearly impossible for them to get attorneys to represent them," Lopez said.

SAN JOSE, California - Apple has added a new toggle that addresses privacy concerns around the location tracking feature on ...

DUBAI, UAE - The 800MW third phase of Dubai's solar park will be operational in April, the Dubai Electricity and ...

WASHINGTON, DC - The Pentagon on Thursday awarded more than half-a-billion dollars in defense contracts.With around 0.53 cents in every ...

WASHINGTON - Key players in the impeachment trial of U.S. President Donald Trump and his defense argued sharply Sunday whether ...

ABUJA, Nigeria - The Indian Mission in Nigeria on Sunday said that 20 seafarers who were kidnapped by pirates last ...

Prince Harry and Meghan to cut formal ties with Palace

More than one billion mammals, birds, and reptiles across eastern Australia are estimated to have been affected by the current ...