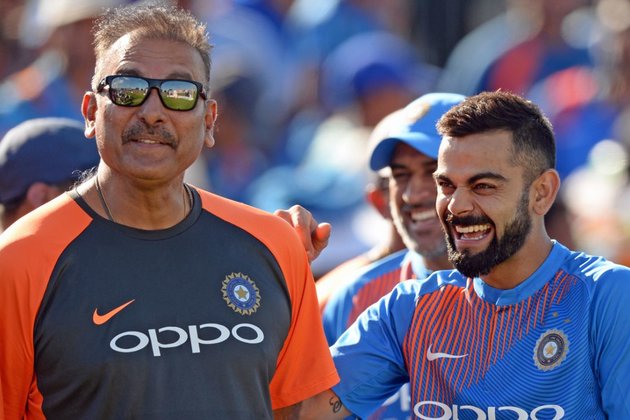 Ravi Shastri will remain head coach of the senior India men's team, with his new contract extending up to the 2021 T20 World Cup in India.

The BCCI's Cricket Advisory Committee (CAC) spent much of Friday interviewing five candidates for head coach, with a sixth - Phil Simmons - pulling out of the race earlier in the day. The CAC rated the candidates on five separate categories - coaching philosophy, experience, achievements, communication, and "knowledge of modern coaching tools" - and Shastri emerged the winner.

Apart from Shastri, Hesson and Moody, the CAC also interviewed Robin Singh, who has coached at four-time IPL champions Mumbai Indians and was formerly India's fielding coach, and Lalchand Rajput, India's manager during their victorious World T20 campaign in 2007 and more recently coach of Afghanistan and Zimbabwe. Hesson, Robin and Rajput made their presentations to the CAC in person, while Moody and Shastri - who is with the India team in the West Indies - appeared via teleconference.

The interviews for the remainder of India's backroom staff will commence next week, tentatively from August 19-22. India's senior selection panel, led by MSK Prasad, was supposed to pick the head coach's support staff, as per the BCCI's new constitution, but ESPNcricinfo understands that the CAC wanted to have a say, and expressed its interest and wrote to the BCCI requesting to be involved in the process.

The contracts of Shastri and his earlier support staff were meant to expire at the end of the 2019 World Cup, but they were given a 45-day extension keeping in mind the ongoing West Indies tour. Ahead of the team's departure for the Caribbean, India captain Virat Kohli made a public announcement that he would prefer if Shastri were to continue as head coach.

When Shastri was appointed in July 2017, the CAC at the time - comprising Sachin Tendulkar, Sourav Ganguly and VVS Laxman - had consulted Kohli during the selection process. This time, the CAC did not seek Kohli's opinion on the matter.

"Absolutely not," Kapil said, when asked if the CAC had been in touch with Kohli before it made its pick. "If we had asked him, we would have had to ask the whole team their opinion too."

The previous CAC had also tried to sort out the differences between Kohli and Anil Kumble, who had stepped down as head coach in fractious circumstances before Shastri's 2017 appointment. It subsequently emerged that Kohli had refused to budge in that instance, which eventually resulted in Kumble opting to walk away.

Shastri first joined India's backroom staff as team director during the 2014 tour of England, and remained director in the absence of a head coach, when Duncan Fletcher's tenure ended after the 2015 World Cup. Shastri was out of the set-up when Kumble became head coach in June 2016, but returned as head coach after Kumble's resignation.

Since then, Shastri has overseen Test match wins in South Africa and England, and a maiden Test series win in Australia, in 2017-18. Under Shastri, India most recently reached the semi-finals of the 2019 World Cup in the UK, topping the round-robin phase of the tournament before exiting with a loss to New Zealand.

Hub for technology-based startups to be developed in Philippines

NEW YORK, New York - U. S. stocks were solidly higher on Wednesday. The dollar too made good ground, particularly ...

MOSCOW, Russia - An international appeals court in the Netherlands has ordered Russia to pay $50 billion in compensation to ...

U.S.-India trade deal not expected during Trump visit next week

WASHINGTON, DC - President Donald Trump has signalled that a "big trade" deal might not be on the agenda during ...

NEW YORK, New York - Wall Street was sharply weaker on Tuesday, joining a global meltdown in stocks. Only the ...

LONDON, UK - The White House has denied a claim aired in a London court this week that President Donald ...

JERUSALEM - Israeli Prime Minister Benjamin Netanyahu says Israel is having discussions about the implementation of direct flights from Tel ...

WHO declares 'progress' in fight against coronavirus

The World Health Organisation on Wednesday hailed "tremendous progress" in the fight against the deadly new coronavirus since it emerged ...

Whereabouts of concelebrating priests not established at Pell trial

Dr Chris Friel examines another of the many concerning aspects of the child sexual abuse case against Cardinal George Pell.This ...

It is a craven, indefensible choice. On Tuesday, European Union foreign ministers agreed to launch a mission in the Mediterranean ...