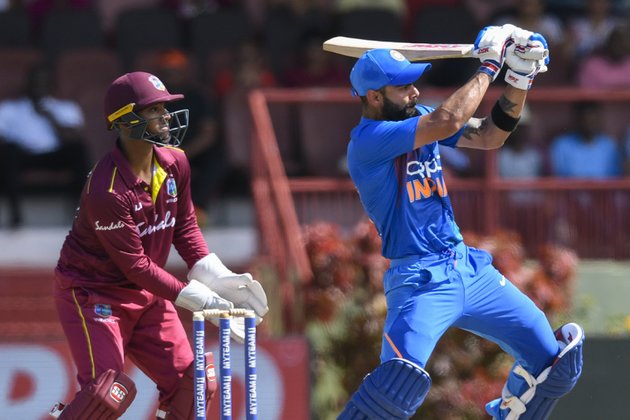 Virat Kohli spoiled Chris Gayle's 300th ODI with his 42nd century in the format, helping India win by 59 runs via the DLS method. India have an unassailable 1-0 lead in the three-match series after the first game was washed out.

Kohli, assisted by Shreyas Iyer's half-century, helped India to 279 for 7. Rain had reduced West Indies' target to 270 in 46 overs and at one stage they needed 91 off 71 balls before slipping from 179 for 4 to 182 for 8. Bhuvneshwar Kumar was the wrecker-in-chief, picking up three of those four wickets - and finishing with figures of 4 for 31 - to effectively seal the game.

After failing to convert five 50-plus scores into a hundred at the World Cup, Kohli ended his relative drought with 120 off 125 balls. During his chanceless knock, he surpassed Sourav Ganguly's tally of 11,363 ODI runs for India. Among Indians, only Sachin Tendulkar (18,426) now has more ODI runs than Kohli's 11,406.

Iyer too made full use of his first innings on the tour with 71 off 68. He played a perfect foil to Kohli, finding singles and boundaries with regular frequency as the duo added 125 in 115 balls for the fourth wicket.

West Indies conceded only 67 from the last ten overs but as it panned out, India had got enough by then.

Kohli had opted to bat first on a humid day after winning his fifth successive toss on this tour but India didn't have a great start. Shikhar Dhawan fell in the first over of the innings to a Sheldon Cottrell delivery that seemed to be swinging away before coming in off the seam to trap the batsman lbw.

Rohit Sharma didn't get off the mark until his 11th delivery but Kohli ensured the scoreboard was always ticking. The second ball Kohli faced, he drove Kemar Roach for four through extra cover. A similar delivery in Roach's next over was flicked wristily to the deep midwicket boundary and when the West Indies pacers bowled straight, Kohli encashed them on the leg side.

Kohli reached his fifty with a four to third man but Rohit never got going at the other end. In an attempt to break the shackles, Rohit ended up slicing Roston Chase towards cover where Nicholas Pooran completed the catch over his shoulder, running backwards.

Continuing at No. 4, Rishabh Pant hit a couple of fours - a whip through midwicket and a cut behind square - but was bowled for 20 off 35 when he failed to connect a pull off Carlos Brathwaite.

With those two wickets, West Indies - and especially Roston Chase - applied brakes on the scoring rate. Chase bowled unchanged for his ten overs and finished with figures of 1 for 37.

Kohli though kept collecting his runs: a nudge here for one, a push there for two and putting away anything loose for four. A majestic six off Jason Holder over long-off took him to 89. Four overs later, Kohli brought up his hundred, off 112 balls. However, a tired shot in the 42nd over brought an end to his knock; he mistimed a Brathwaite slower ball to Roach at long-off.

A light drizzle halted play in the 43rd over for about 25 minutes. Iyer and Kedar Jadhav returned to take the side to 250 in the 45th over but India could never really accelerate from there.

Still, the hosts needed to pull off the highest successful chase at this venue in order to register a win.

Gayle became the leading ODI run-scorer from the West Indies going past Brian Lara's tally of 10,405 runs (those scored for ICC combined teams included) with a four off Khaleel Ahmed but was lbw soon after to Bhuvneshwar. Shai Hope didn't last long either and chopped Khaleel onto his stumps.

Rain once again made an appearance in the 13th over of the chase and this time forced a reduction of four overs with ten runs taken off the target.

Lewis who had struck four fours and a pulled six off Bhuvneshwar before the rain break resumed with another boundary, a swept four off Kuldeep Yadav. But Shimron Hetmyer ended up skying a quicker one from the wristspinner to Virat Kohli at extra cover.

Struggling through a calf injury, Lewis brought up his maiden ODI fifty in the Caribbean but became Kuldeep's second victim after failing to middle a cut shot. Kohli at extra cover leapt in the air and plucked a one-handed catch.

Pooran was severe on both Kuldeep and Jadhav, while Chase kept rotating the strike. The latter also had a slice of luck in the 33rd over when Mohammed Shami failed to latch on to a return catch when the batsman was on 10.

But Bhuvneshwar, returning for his second spell, removed both batsmen in the same over to peg West Indies back. Pooran ended up top-edging a knuckle ball to Kohli in front of square, while a brilliant one-handed return catch sent Chase back.

Brathwaite fell to Ravindra Jadeja in the next over and Roach chopped one on to his stumps to give Bhuvneshwar his fourth wicket. There were some fireworks from Cottrell towards the end but West Indies were all but out of the game by then.

SYDNEY, Australia - Shares in Japan sank on Monday as the country's economy recorded its slowest quarterly growth in six ...

NEW YORK, New York - The State of New York will not be appealing the case it jointly pursued with ...

Wall Street ends with a wobble

NEW YORK, New York - U.S. stocks were mixed on Friday as the ebb and flows of the coronavirus news ...

Chinese health officials said Sunday that the number of new cases of the coronavirus has slowed for the third consecutive ...

TEHRAN, Iran - Iran on Saturday threw down the gauntlet to the United States, demanding it provide proof to its ...

UNNAO, Uttar Pradesh, India - At least seven people were on Sunday burned to death after a truck and van ...