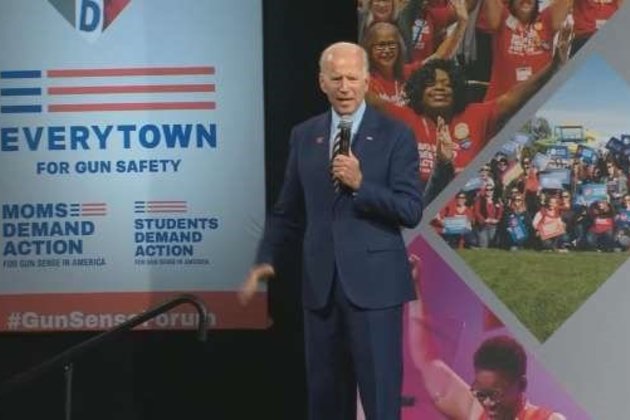 Democratic 2020 presidential hopefuls made proposals ranging from firearm licensing to re-imposing an assault weapons ban at an Iowa gun safety forum on Saturday, one week after mass shootings that thrust the country's firearm violence into the presidential race.

Following back-to-back massacres left a total of 31 people dead in El Paso, Texas and Dayton, Ohio, the candidates spoke largely in harmony on the issue that has seen little action at the federal level despite huge tolls from gun use, including nearly 40 000 deaths in 2017.

Frontrunner and former vice president Joe Biden and other candidates like senators Elizabeth Warren and Bernie Sanders converged on the day-long event in the state that votes first to determine which Democrat will challenge President Donald Trump in 2020.

The event comes as Trump grapples with steps Congress might take to tackle gun violence, including expanding background checks to virtually all people buying weapons, including purchases at gun shows.

But it also follows Trump's repeated assertions that mental health issues and hate, not guns, are the main drivers of the deadly violence, and his talks with leaders of the National Rifle Association, which is opposed to expanding background checks.

Democrats came to the forum armed with various plans aimed at ultimately reducing the carnage that is a uniquely American problem within with world's leading economies.

Several demanded that the Senate vote on the House-cleared measure expanding background checks, as well as one that codifies so-called red flag laws which allow authorities to confiscate weapons from people believed to present risks to themselves or others.

Warren told the crowd of activists and gun violence survivors that she believed the sorrow and anger following recent shootings can give way to meaningful action.

"We are going to make change, we are going to pass gun safety laws in this country," said Warren, who released a gun violence reduction plan earlier Saturday.

Warren stressed that one of her first actions as president would be "breaking the stranglehold of the gun industry and the NRA" in order to help achieve her goal of an 80 percent reduction in the number of US gun deaths.

As the Democratic candidates criss-crossed Iowa in recent days, several took up the cause of gun safety, advocating for dramatic steps like re-imposing an assault weapons ban that became law 25 years ago, only to sunset a decade later.

"I did that in 1994," Biden told the crowd, referring to his vote to pass the ban while he was a US senator. "We can do that again."

Biden advocated increased use of biometrics, saying as president he would seek a law requiring manufacturers to begin using technology like fingerprint-activated smart guns.

And he joined other candidates like senators Kamala Harris and Kirsten Gillibrand in demanding that a law immunising manufacturers from civil lawsuits be rescinded.

There were at least 15 candidates at the event, not including El Paso native Beto O'Rourke who was in his hometown but sent a video message to the group.

From 'unity' to action

Michael Bloomberg, the former New York City mayor who is a main funder of Everytown for Gun Safety which organised the forum, applauded activists and gun survivors and said Americans are ready to answer the challenge of gun violence.

"There has never been more unity on gun safety across so many Democratic presidential candidates, and across the entire Democratic Party, as there is today," Bloomberg said.

"Now, we've got to take that unity that we built and translate it into action in Washington."

Many Republicans in Congress argue that taking dramatic steps to curtail gun purchases would infringe on Americans' constitutional right to bear arms.

But the testimonies from several gun violence survivors, including mothers whose children were murdered, heaped pressure on lawmakers to act to prevent more tragedy.

Jackie Jackson, a pastor from Cincinnati, said 12 of his relatives have been killed or wounded in gun violence since 2013.

"We need a president in the White House... that's going to care about the lives that are being lost," Jackson told AFP.

"The biggest uphill battle is not with the public (but) the politicians, mainly in the GOP, who are supporting the gunmakers."

LONDON, UK - Britain's Digital Secretary Oliver Dowden has told the House of Commons that by the time of the ...

SYDNEY, NSW, Australia - Stocks in Asia fell on Tuesday inline with overnight falls on Wall Street.Stocks rallied around the ...

The COVID-19 pandemic's toll on economic activity in recent months is only the beginning of the story. While the rapid ...

UK to spend hundreds of millions of pounds on border infrastructure

DHAKA, Bangladesh - Officials and volunteers in Bangladesh say heavy flooding is worsening in parts of the country, with more ...

KABUL, Afghanistan, July 14 (Sputnik/ANI) - U.S. troops have left five bases in Afghanistan and the number of servicemen in ...

TEHRAN (Tasnim) - A retired employee of Iran's Defense Ministry has been hanged for providing the US Central Intelligence Agency ...

Over 650,000 Indians evacuated from abroad amid pandemic

Russia's nuclear policy remains "defensive." However, a number of new conditions have been set for when a strike can be ...

Bahrain to execute two men 'convicted as result of torture'

MANAMA, Bahrain - The High Court of Bahrain has upheld death sentences against two pro-democracy activists who were charged and ...

War and Peace (Vojna i mir)